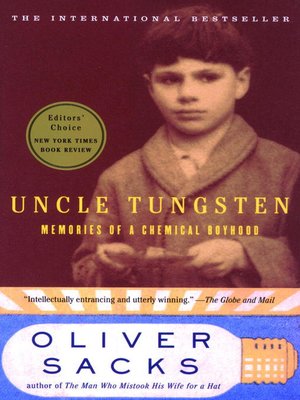 Memories of a Chemical Boyhood

Biography & AutobiographyScienceChemistryNonfiction
From the distinguished neurologist who is also one of the most remarkable storytellers of our time — an account of his youth, as unexpected and fascinating as his celebrated case histories.
What first aroused Sacks' boundless curiosity?
In this wonderful memoir, he evokes, with warmth and wit, his childhood in wartime England. There was the large, scientifically minded family in which his very early fascination with meals was nurtured – particularly by "Uncle Tungsten." There were his four years at the boarding school where he was sent at the outbreak of World War II to escape the bombings, and where, though he suffered extreme deprivation and cruelty, one can see the first gleam of his interest in the intellectual pursuits that would begin to shape him. And there was his return to London, an emotionally bereft 10-year-old who found solace in the secret garden of his passion for learning – about the nature of metals, gases and chemicals; about the hidden order of things outside himself.
Uncle Tungsten radiates the magic, the delight and the wonder of the birth, in a young boy, of the unquenchable desire for knowledge. It is an unforgettable portrait of an extraordinary mind.
Biography & AutobiographyScienceChemistryNonfiction

More about Oliver Sacks
Uncle Tungsten
Copy and paste the code into your website.
New here? Learn how to read digital books for free