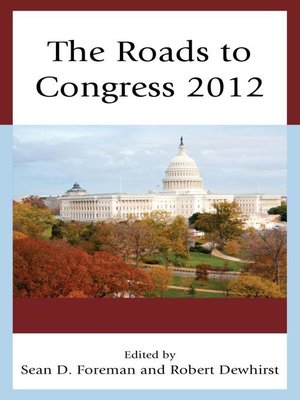 The 2012 congressional elections played an equally vital role in determining the future course of America as the presidential race that topped the electoral ticket. Readers of this book will gain insights about the formative aspects of the 2012 campaign season as well as in depth coverage of key races for Congress. Exclusive to this volume are three chapters that look at important processes which impacted the campaign cycle: voter suppression laws passed in nearly every state, the role of Super PACs and independent expenditures in the wake of the Citizens United Supreme Court decision, and the results of redistricting and partisan gerrymandering throughout the country. Then the case studies follow the path of seven House and six Senate races from inception to election postmortem. The chapters are both narrative and provide analysis of an array of interesting and diverse contests from throughout the country. Each entry was written by one or more experts living in the state or region of the race. The authors provide succinct and highly readable chapters meant to illustrate the distinctive nature of the campaigns they are examining. Readers will see individual campaigns and elections "up close" and be able to compare and contrast one from another because of the common format employed throughout the book. Taken together, the chapters reveal that the roads to Congress, while similar in so many ways, each follow a unique route to Capitol Hill.

Politics Nonfiction
The Roads to Congress 2012