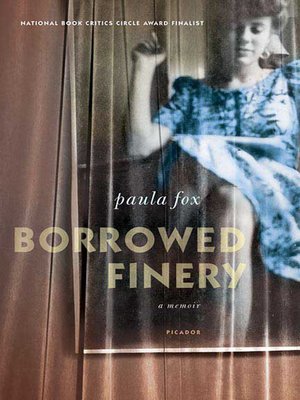 An exotic, heartbreaking memoir that should finally earn Paula Fox, a distinguished novelist and children's book writer, the audience she has for decades deserved
Paula Fox has long been acclaimed as one of America's most brilliant fiction writers. Borrowed Finery, her first book in nearly a decade, is an astonishing memoir of her highly unusual beginnings.
Born in the twenties to nomadic, bohemian parents, Fox is left at birth in a Manhattan orphanage, then cared for by a poor yet cultivated minister in upstate New York. Her parents, however, soon resurface. Her handsome father is a hard-drinking screenwriter who is, for young Paula, "part ally, part betrayer." Her mother is given to icy bursts of temper that punctuate a deep indifference. How, Fox wonder, is this woman "enough of an organic being to have carried me in her belly"?
Never sharing more than a few moments with his daughter, Fox's father allows her to be shunted from New York City, where she lives with her passive Spanish grandmother, to Cuba, where she roams freely on a relative's sugar-cane plantation, to California, where she finds herself cast upon Hollywood's grubby margins. The thread binding these wanderings is the "borrowed finery" of the title-a few pieces of clothing, almost always lent by kind-hearted strangers, that offer Fox a rare glimpse of permanency.
Vivid and poetic, Borrowed Finery is an unforgettable book which will swell the legions of Paula Fox's devoted admiriers.