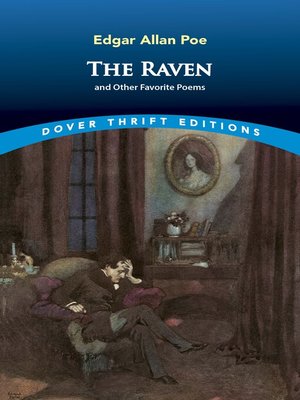 The Raven and Other Favorite Poems

One of the most famous poems in the English language, "The Raven" first appeared in the January 29, 1845, edition of the New York Evening Mirror. It brought Edgar Allan Poe, then in his mid-30s and a well-known poet, critic, and short story writer, his first taste of celebrity on a grand scale. "The Raven" remains Poe's best-known work, yet it is only one of a dazzling series of poems and stories that won him an enduring place in world literature.
This volume contains "The Raven" and 40 others of Edgar Allan Poe's most memorable poems, among them "The Bells," "Ulalume," "Israfel," "To Helen," "The Conqueror Worm," "Eldorado," and "Annabel Lee." Together they reveal the extraordinary spectrum of Poe's personality — his idealism; his visionary qualities; his responsiveness to beauty, to love, and to women; and his susceptibility to the eerie and the morbid. They reveal, too, his virtuoso command of poetic language, rhythms, and figures of speech — command that would make his one of the most distinctive voices in all of poetry.A selection of the Common Core State Standards Initiative.

The Raven and Other Favorite Poems
Copy and paste the code into your website.
New here? Learn how to read digital books for free