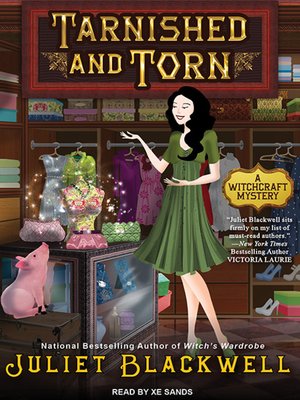 FictionLiteratureMystery
When Lily arrives at an antique jewelry fair, her bargain sensors go off left and right-but she also picks up a faint vibration of magic. Could the hard-bargaining merchant Griselda be a fellow practitioner? It certainly seems that way when a sudden fire sends panic through the crowd, and Lily discovers Griselda murdered in a way that nods to an old-fashioned witch hunt. A crime that hits close to home turns into an unwelcome flash from the past when the police bring in their lead suspect-Lily's estranged father. Though he may not deserve her help, Lily is determined to clear her father's name and solve a murder that's anything but crystal clear.
FictionLiteratureMystery

Juliet Blackwell is the New York Times bestselling author of The Paris Key, Letters from Paris, and The Lost Carousel of Provence. She makes her home in Northern California.

More about Juliet Blackwell
Tarnished and Torn
Copy and paste the code into your website.
New here? Learn how to read digital books for free