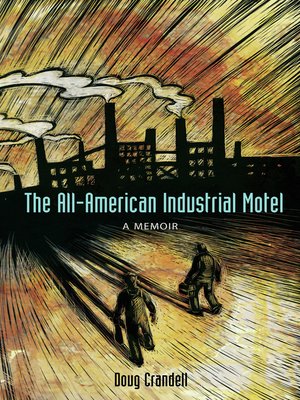 This volatile memoir from Doug Crandell weaves a darkly comic and thoroughly heartbreaking coming-of-age tale set in 1990 as the author is about to graduate from college. With very few job prospects and in need of tuition money, he joins his father working at a ceiling tile factory in tiny Lagro, Indiana. As his father moves headlong into a midlife crisis—complete with a bad toupee and a penchant for drinking on the job—Crandell's mother struggles with depression and talks in the third person as she manages a fast-food joint, where she compels her crew to dress in homemade costumes. As the author struggles to finish his degree, he also fights the urge to stay where he is and end up a “lifer" like his father. But before long, the monotonous work takes its toll on Crandell, making him realize just how similar he and his dad are. From their joint substance abuse to their feelings about the coworkers they watch buried from asbestosis, the Crandell men struggle to find a way to communicate. This powerful book explores themes of modern manhood, hope, and the power of labor to bring together workers, families, and even macho men.

Doug Crandell is the author of Pig Boy's Wicked Bird. His stories and essays have appeared in Atlanta Magazine, Glimmer Train, Indianapolis Monthly, Smithsonian, and The SUN and have been published in the anthologies Mother Knows: 24 Tales of Moth...

More about Doug Crandell
The All-American Industrial Motel
Copy and paste the code into your website.
New here? Learn how to read digital books for free