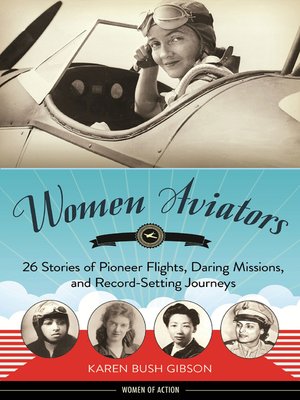 Detailing the role of women in aviation, from the very first days of flight to the present, this rich exploration of the subject profiles 26 women pilots who sought out and met challenges both in the sky and on the ground. Divided into six chronologically arranged sections, this book composes a minihistory of aviation. Learn about pioneers such as Katherine Wright, called by many the "Third Wright Brother," and Baroness Raymonde de Laroche of France, the first woman awarded a license to fly. Read about barnstormers like Bessie Coleman and racers like Louise Thaden, who bested Amelia Earhart to win the 1929 Women's Air Derby. Additional short biography sidebars for other key figures and lists of supplemental resources for delving deeper into the history of the subject are also included.

Karen Bush Gibson is the author of three dozen books for young readers, including Native American History for Kids. She lives in Norman, Oklahoma.

More about Karen Bush Gibson
Women Aviators
Copy and paste the code into your website.
New here? Learn how to read digital books for free