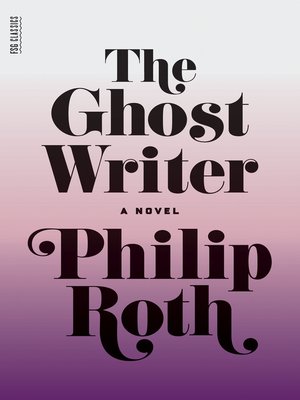 A National Book Award Finalist and a National Book Critics Circle Award Nominee.
Shocking, comic, and sad by turns, Philip Roth's The Ghost Writer is the work of a major novelist in full maturity.
The Ghost Writer, Roth's eleventh book, begins with a young writer's search, twenty years ago, for the spiritual father who will comprehend and validate his art, and whose support will justify his inevitable flight from a loving but conventionally constricting Jewish middle-class home. Nathan Zuckerman's quest brings him to E.I. Lonoff, whose work—exquisite parables of desire restrained—Nathan much admires. Recently discovered by the literary world after decades of obscurity, Lonoff continues to live as a semi-recluse in rural Massachusetts with his wife, Hope, scion of an old New England family, whom the young immigrant married thirty-five years before.
At the Lonoffs' Nathan also meets Amy Bellette, a haunting young woman of indeterminate foreign background. He is instantly infatuated with the attractive and gifted girl, and at first takes her for the aging writer's daughter. She turns out to be a former student of Lonoff's—and may also have been Lonoff's mistress. Zuckerman, with his imaginative curiosity, wonders if she could be the paradigmatic victim of Nazi persecution. If she were, it might change his life.
A figure of fun to the New York literati, a maddeningly single-minded isolate to his wife, teacher-father-savior to Amy, Lonoff embodies for an enchanted Nathan the ideal of artistic integrity and independence. Hope sees Amy (as does Amy herself) as Lonoff's last chance to break out of his self-imposed constraints, and she bitterly offers to leave him to the younger woman, a chance that, like one of his own heroes, Lonoff resolutely continues to deny himself. Nathan, although in a state of youthful exultation over his early successes, is still troubled by the conflict between two kinds of conscience: tribal and family loyalties, on the one hand, and the demands of fiction, as he sees them, on the other. A startling imaginative leap to the beginnings of a kind of wisdom about the unreckoned consequences of art.