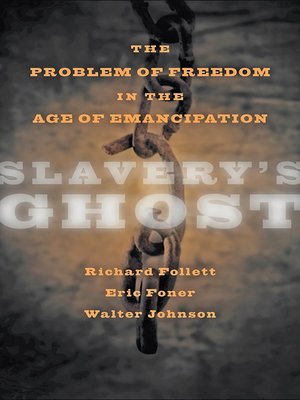 View more libraries...
"Three thoughtful contributions . . . attempt to deepen and extend an emerging discussion about the limits to African American freedom and autonomy." —Slavery & Abolition
President Abraham Lincoln freed millions of slaves in the South in 1863, rescuing them, as history tells us, from a brutal and inhuman existence and making the promise of freedom and equal rights. This is a moment to celebrate and honor, to be sure, but what of the darker, more troubling side of this story? Slavery's Ghost explores the dire, debilitating, sometimes crushing effects of slavery on race relations in American history.
In three conceptually wide-ranging and provocative essays, the authors assess the meaning of freedom for enslaved and free Americans in the decades before and after the Civil War. They ask important and challenging questions: How did slaves and freedpeople respond to the promise and reality of emancipation? How committed were white southerners to the principle of racial subjugation? And in what ways can we best interpret the actions of enslaved and free Americans during slavery and Reconstruction? Collectively, these essays offer fresh approaches to questions of local political power, the determinants of individual choices, and the discourse that shaped and defined the history of black freedom.
Written by three prominent historians of the period, Slavery's Ghost forces readers to think critically about the way we study the past, the depth of racial prejudice, and how African Americans won and lost their freedom in nineteenth-century America.