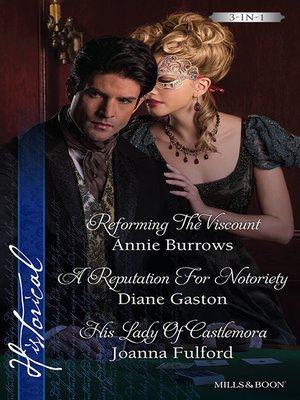 Reforming The Viscount by Annie Burrows

Furtive glances across the ballroom are not helping to ease Lydia's state of shock – Viscount Rothersthorpe, the man who once uttered a marriage proposal has returned. But when he stuns her with a second outrageous – but now wickedly delicious – proposal, it is clear that the rake from her past has not reformed!

A Reputation For Notoriety by Diane Gaston

John 'Rhys' Rhysdale was forced to earn a crust gambling on the streets. But now he owns the most thrilling new gaming establishment in London.

Witnessing polite society's debauchery, Rhys prefers to live on its fringes, until a mysterious masked lady known only as Madame Fortune, matches Rhys card for card and kiss for stolen kiss. But the stakes are raised when Rhys discovers she's from the very world he despises...

His Lady Of Castlemora by Joanna Fulford

The infamous Lord Ban, a battle–hardened warrior, must turn his thoughts to producing an heir.

The recently widowed but ever beautiful Lady Isabelle is left with no hope for the future. Believed to be barren, she is forced into a secret betrothal to the powerful Lord. On one condition – she must be with child before the wedding vows are spoken...