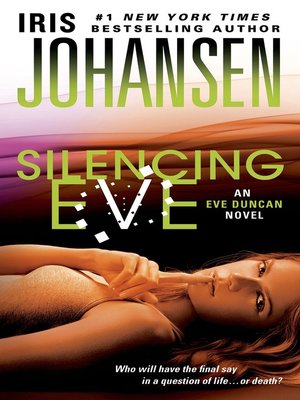 #1 New York Times bestselling author Iris Johansen is back with the shocking conclusion to the latest Eve Duncan trilogy.

This is the finale that fans have been waiting for. In Taking Even, the game began. In Hunting Eve, the chase was on. Now, in Silencing Eve, the prey is cornered. Will Eve Duncan survive? Will those she loves take the fall with her? And will the secrets of Eve's past ultimately become her undoing? In Silencing Eve, all the questions will be answered in a shocking, you never saw it coming conclusion.

Iris Johansen's 2012 trilogy, Eve, Quinn, Bonnie was a phenomenal success, reaching number one on bestseller lists nationwide. Now, with this newest trilogy, the stakes are even higher because it's a question of capture and escape, hunter and prey, life and death.

More about Iris Johansen
Silencing Eve
Copy and paste the code into your website.
New here? Learn how to read digital books for free