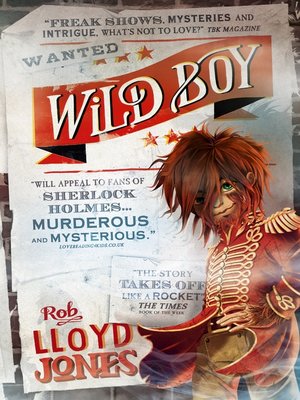 A fiendishly pacy mystery-adventure story for 9+ readers, set in the seamy, smoggy underworld of Victorian London.

BEHOLD THE SAVAGE SPECTACLE OF THE WILD BOY – ONE PENNY A KICK! Wild Boy has been covered in hair since birth; he's the missing link, a monster, a sideshow spectacle. Condemned to life in a travelling freakshow, excluded from society and abused by his master, he takes refuge in watching people come and go at the fair – and develops a Sherlock Holmes style talent for observation and detection. But when there's a murder, suspicion turns on Wild Boy, and he and the feisty redhaired acrobat Clarissa Everett find themselves on the run from a London-wide manhunt. Together, the detective and the acrobat must solve clues to identify the real killer, confronting the sinister underside of scientific advancement and the darkness of Wild Boy's own nature.