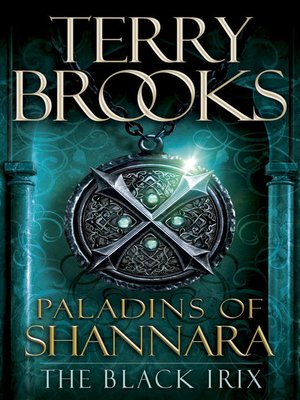 Shea Ohmsford has had quite enough of quests. A year after surviving a harrowing odyssey, he is still plagued by troubling memories and dreams. A mysterious trafficker in spells and potions provides a restorative nostrum for the stricken Shea . . . along with a warning: Shea will break his vow to never again leave Shady Vale. And then the potion-maker's prophecy comes to pass.

A thief, adventurer, and notoriously charismatic rogue, Panamon Creel unexpectedly appears in the Vale with a request for his longtime friend, Shea—journey into the untamed northland, infiltrate the stronghold of a sinister dealer in stolen goods, and capture a precious artifact: the sacred Black Irix. Creel wishes to return this treasure to its rightful owners. Shea cannot refuse such a just cause. But what lies behind the black castle walls they must breach? And will this quest truly be their last?

"The Shannara books were among the first to really capture my imagination. My daydreams and therefore my stories will always owe a debt to Terry Brooks."—Brandon Mull, #1 New York Times bestselling author of the Beyonders and Fablehaven series
FantasyFictionShort Stories

More about Terry Brooks
The Black Irix
Copy and paste the code into your website.
New here? Learn how to read digital books for free