The Rise of the Hotel Dumort 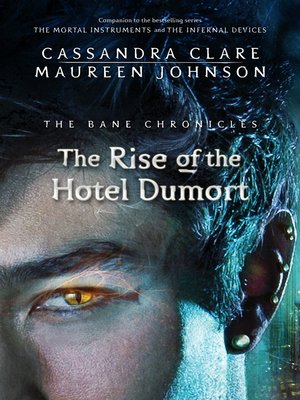 Magnus Bane witnesses his favourite 1920s hotspot fade into decay as the decades pass ... and the vampires take over. One of ten eBook short stories in The Bane Chronicles, a series about the enigmatic warlock from The Mortal Instruments and The Infernal Devices. Also don't miss The Mortal Instruments: City of Bones, in cinemas August 2013!

The immortal Magnus Bane is making the most of his time in the Roaring Twenties: He's settled into New York society and is thriving among the fashionable jazz set. And there is nowhere better to see and be seen than the glamorous Hotel Dumont, a glittering new addition to the Manhattan landscape. But nothing lasts forever... Fifty years later, the hotel is decayed and ruined, as dead as a place can be. But the vampires don't seem to mind. One of ten eBook short stories in The Bane Chronicles, a series about the enigmatic warlock and fan favourite Magnus Bane from Cassandra Clare's internationally bestselling series The Infernal Devices and The Mortal Instruments. Also don't miss The Mortal Instruments: City of Bones, in cinemas August 2013! Follow /TheMortalInstrumentsUK on facebook or @InstrumentsUK on twitter for movie news.