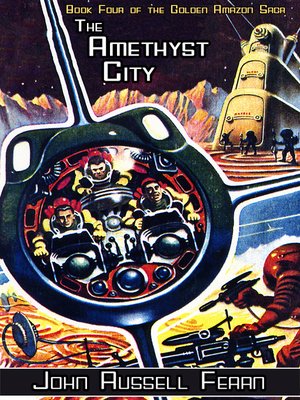 The human-occupied planets in the Solar System, Earth and Mars, are suddenly threatened with a space-borne plague that rusts and destroys all metals. If the "disease" continues unchecked, all of civilization is threatened. Behind this insidious menace is Sefner Quorne, the sinister master scientist of Atlantis. Quorne had earlier enslaved the humans on Earth, until he was deposed by the Golden Amazon and Abna, the real Lord of Atlantis. But now, with Abna dead, and the Amazon mortally wounded on one of the moons of Jupiter, nothing can halt Quorne's plans—until a lone space traveller abruptly intervenes. Viona, a beautiful young woman whose origins are shrouded in mystery, is somehow connected to the mysterious Amethyst City of Saturn...a place that cannot possibly exist!

Volume Four in this exciting continuing saga of Earth and space.

The Amethyst City
Copy and paste the code into your website.
New here? Learn how to read digital books for free