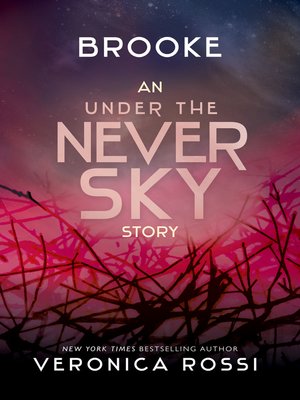 Set just before the events of Into the Still Blue, the conclusion to Veronica Rossi's "masterpiece" Under the Never Sky trilogy (Examiner.com), this breathtaking novella is a satisfying stand-alone for new readers as well as an exciting glimpse at favorite characters from the trilogy. Pulsing with romance and danger, Brooke will leave readers desperate for the conclusion to this epic and unforgettable saga.

The only fight she can't win is the one for Perry's heart. Following the stunning climax in Through the Ever Night, the Tides have been forced to seek shelter from the Aether storms in a dismal, secluded cave. But Brooke's memories of the cave go back much further, to when she and Perry used to come here together. That was before Perry fell in love with Aria and before Vale's dealings with the Dwellers altered the course of the Tides forever.

Now, with her sister back from a haunting year in captivity and Aria lying unconscious in the sick bay, Brooke struggles to put the pieces of her life back together. Without Perry, who is she? And what is her role in this frightening new world? As these questions swirl about her, an old threat to the Tides resurfaces, and Brooke is forced to put the lives of her people before her own. But in taking this step outside of herself, Brooke may finally discover what she truly wants.

Veronica Rossi graduated from UCLA. The first book in her New York Times bestselling Under the Never Sky trilogy was named an ALA Best Fiction for Young Adults selection and an Indie Next List Pick. The second book, Through the Ever Night, was a N...

More about Veronica Rossi
Brooke
Copy and paste the code into your website.
New here? Learn how to read digital books for free