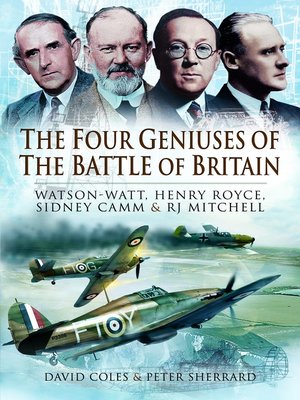 The Four Geniuses of the Battle of Britain

"Had it not been for the vital contributions of the four men and their inventions described in this book the Battle of Britain could not have been won by the Royal Air Force. Each of these brilliant men contributed enormously to the aircraft and equipment upon which the gallant RAF fighter pilots depended to take on and defeat the hitherto overpowering Luftwaffe during Hitler's European onslaught.

Henry Royce was the driving force throughout the development of the Merlin engine that powered both the Hurricane and Spitfire.

Sydney Camm persevered with the design of the Hawker Hurricane which was to destroy more Luftwaffe bombers in the Battle than any other type. It was amazingly resilient and provided an extremely stable gun platform. Never living long enough to see the success of his beautiful Spitfire, RJ Mitchell was the designer of the only British aircraft that could outperform the Nazi Bf 109s fighters and which allowed the attacking Hurricanes a little more safety while doing their job below.

This is the story of those men behind the scene of the greatest air battle in history. "

More about David Coles
The Four Geniuses of the Battle of Britain
Copy and paste the code into your website.
New here? Learn how to read digital books for free