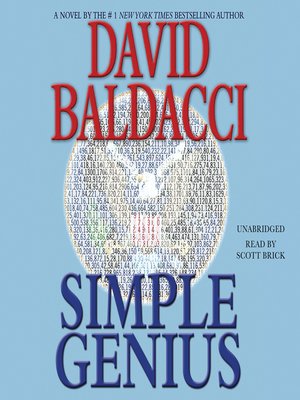 FictionMysteryThriller
Two ex-Secret Service agents must face a dark world of violence, codes, and spies at a secret CIA training camp in this #1 New York Times bestseller about a mystery that could destroy the nation.
Near Washington, D.C., there are two clandestine institutions: the world's most unusual laboratory and a secret CIA training camp. Drawn to these sites by a murder, ex-Secret Service agent Sean King encounters a dark world of mathematicians, codes, and spies. His search for answers soon leads him to more shocking violence-and an autistic girl with an extraordinary genius.
Now, only by working with his partner, Michelle Maxwell, who is battling her own personal demons, can he catch a killer...and stop a national threat.
FictionMysteryThriller

More about David Baldacci
Simple Genius
Copy and paste the code into your website.
New here? Learn how to read digital books for free