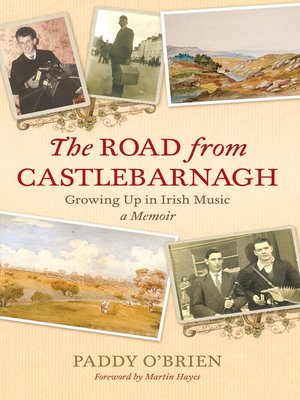 Growing Up in Irish Music, a Memoir

The Road from Castlebarnagh, Paddy O'Brien's lyrical account of growing up in County Offaly in the 1950s and 1960s, is the story of the making of one of Ireland's most talented traditional musicians. Paddy grew up at a time when the social life in the Irish countryside often took place around the fireplace, where stories were told and music was played. In his book he writes of the many colourful characters who shaped his perception of Irish life and culture. Showing Paddy's flair for story telling and written in gentle, musical prose, The Road from Castlebarnagh is the story of how a young musician absorbed his surroundings towards developing his own distinctive musical style.

Paddy O'Brien is an Irish traditional musician and noted collector. In a musical career spanning nearly 40 years, he has collected more than 3,000 compositions - jigs, reels, hornpipes, airs, and marches, including many rare and unusual tunes. He ...

More about Paddy O'Brien
The Road from Castlebarnagh
Copy and paste the code into your website.
New here? Learn how to read digital books for free