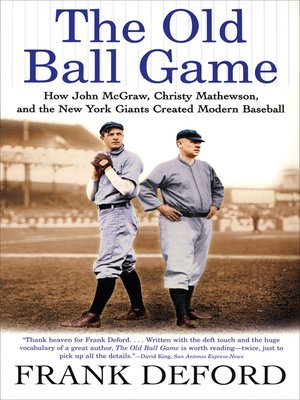 At the turn of the twentieth century, Christy Mathewson was one of baseball's first superstars. Over six feet tall, clean cut, and college educated, he didn't pitch on the Sabbath and rarely spoke an ill word about anyone. He also had one of the most devastating arms in all of baseball. New York Giants manager John McGraw, by contrast, was ferocious. The pugnacious tough guy was already a star infielder who, with the Baltimore Orioles, helped develop a new, scrappy style of baseball, with plays like the hit-and-run, the Baltimore chop, and the squeeze play. When McGraw joined the Giants in 1902, the Giants were coming off their worst season ever. Yet within three years, Mathewson clinched New York City's first World Series for McGraw's team by throwing three straight shutouts in only six days, an incredible feat that is invariably called the greatest World Series performance ever. Because of their wonderful odd-couple association, baseball had its first superstar, the Giants ascended into legend, and baseball as a national pastime bloomed.