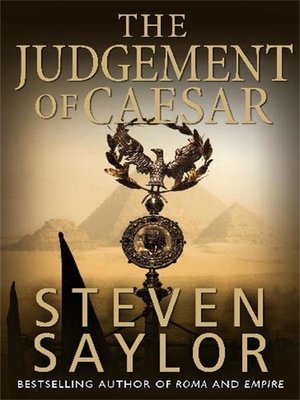 The Judgement of Caesar

FictionHistorical Fiction
It is 48 BC.For years now the rival Roman generals Caesar and Pompey have engaged in a contest for world domination. Both now turn to Egypt, Pompey planning a last stand on the banks of the Nile, while Caesar's legendary encounter with the Egyptian queen will spark a romance that reverberates down the centuries. But Egypt itself is torn apart by the murderous rivalry between the goddess-queen and her brother King Ptolemy. Into this hothouse atmosphere of intrigue and deception comes Gordianus the Finder, innocently seeking a cure for his wife Bethesda in the sacred waters of the Nile. But soon he finds himself engaged in an even more desperate pursuit - to prove the innocence of his son, who stands accused of murder. The judgement of Caesar will determine the fate of Gordianus's son; the choice Caesar makes between Cleopatra and Ptolemy will determine the future of the world. Saylor presents a bold new vision of Caesar and Cleopatra, amid bloodshed and battle, in a setting of Egyptian mystery.
FictionHistorical Fiction

More about Steven Saylor
The Judgement of Caesar
Copy and paste the code into your website.
New here? Learn how to read digital books for free