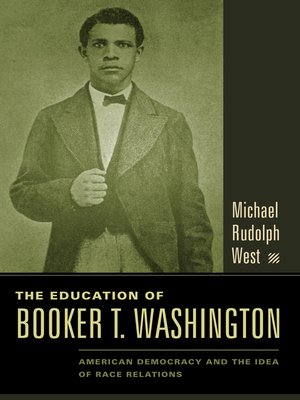 The Education of Booker T. Washington

American Democracy and the Idea of Race Relations

Booker T. Washington has long held an ambiguous position in the pantheon of black leadership. Lauded by some in his own lifetime as a black George Washington, he was also derided by others as a Benedict Arnold. In The Education of Booker T. Washington, Michael West offers a major reinterpretation of one of the most complex and controversial figures in American history. West reveals the personal and political dimensions of Washington's journey "up from slavery." He explains why Washington's ideas resonated so strongly in the post-Reconstruction era and considers their often negative influence in the continuing struggle for equality in the United States. West's work also establishes a groundwork for understanding the ideological origins of the civil rights movement and discusses Washington's views on the fate of race and nation in light of those of Thomas Jefferson, Frederick Douglass, Martin Luther King Jr., and others.

West argues that Washington's analysis was seen as offering a "solution" to the problem of racial oppression in a nation professing its belief in democracy. That solution was the idea of "race relations." In practice, this theory buttressed segregation by supposing that African Americans could prosper within Jim Crow's walls and without the normal levers by which other Americans pursued their interests. Washington did not, West contends, imagine a way to perfect democracy and an end to the segregationist policies of southern states. Instead, he offered an ideology that would obscure the injustices of segregation and preserve some measure of racial peace.

White Americans, by embracing Washington's views, could comfortably find a way out of the moral and political contradictions raised by the existence of segregation in a supposedly democratic society. This was (and is) Washington's legacy: a form of analysis, at once obvious and concealed, that continues to prohibit the realization of a truly democratic politics.

The Education of Booker T. Washington
Copy and paste the code into your website.
New here? Learn how to read digital books for free