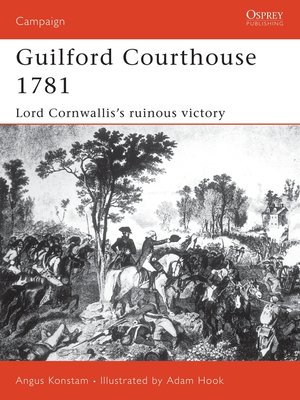 By the Spring of 1781, the American Revolutionary War (1775--1783) had dragged on for almost six years and the outcome still hung in the balance. When the British commander Lord Cornwallis launched his invasion of North Carolina in early 1781, his objective was to destroy General Nathaniel Greene's American army. At Guilford Courthouse on 15 March 1781 the two armies met. In a desperately hard-fought battle the small but professional British army succeeded in fighting its way through three separate lines of American troops -- but at a dreadful cost. Cornwallis lost over a quarter of his command. When news of the 'victory' reached Britain, a politician remarked; 'Another such victory would ruin the British army'.