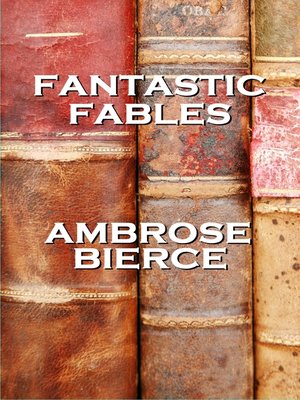 Fantastic Fables is a collection of short stories by the American writer, satirist and author of The Devil's Dictionary, Ambrose Bierce. Such numerous fables and anecdotes represent a combination of realism, acerbic social criticism and sarcasm with some Gothic elements. Bierce's works are often compared to those of La Fontaine and he is often nicknamed "Bitter Bierce" or the "American Swift". His style is highly poetic due to the extensive employment of metaphors and other figures of speech such as the personification of animals and concepts. Fantastic Fables also represents a mine of entertaining, far-fetched quips which vent rage on the social hypocrisy of politicians, manipulative religious men and dishonest physicians and businessmen. Bierce's anecdotes in short stories like "The Poet's Doom," "The Honorable Member," "The Moral Principle and the Material Interest" and "The Witch's Steed" are just a bittersweet blend of anger and contempt on the one hand with rather naughty and funny representations on the other. They depict Bierce's different corrupt and crooked characters as they sneak, cheat and steal while trying to maintain a respectable social image.

Fantastic Fables
Copy and paste the code into your website.
New here? Learn how to read digital books for free