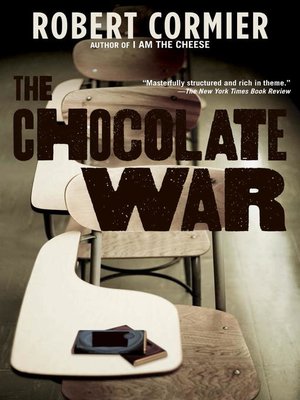 View more libraries...
One of the most controversial YA novels of all time, The Chocolate War is a modern masterpiece that speaks to fans of S. E. Hinton’s The Outsiders and John Knowles’s A Separate Peace.

After suffering rejection from seven major publishers, The Chocolate War made its debut in 1974, and quickly became a bestselling—and provocative—classic for young adults. This chilling portrait of an all-boys prep school casts an unflinching eye on the pitfalls of conformity and corruption in our most elite cultural institutions.
“Masterfully structured and rich in theme; the action is well crafted, well timed, suspenseful.”—The New York Times Book Review

“The characterizations of all the boys are superb.”—School Library Journal, starred review
“Compellingly immediate. . . . Readers will respect the uncompromising ending.”—Kirkus Reviews, starred review
An ALA Best Book for Young Adults
A School Library Journal Best Book of the Year
A Kirkus Reviews Editor’s Choice
A New York Times Outstanding Book of the Year