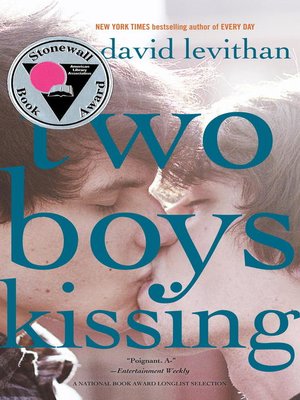 View more libraries...
"You have to read this." —Rainbow Rowell, bestselling author of Eleanor & Park
In his follow-up to tthe New York Times bestselling author of Every Day, andDavid Levithan, coauthor of bestsellers Will Grayson, Will Grayson (with John Green) and Nick & Norah's Infinite Playlist (with Rachel Cohn), crafts a novel that the Los Angeles Times calls "open, frank, and ultimately optimistic."

Based on true events—and narrated by a Greek Chorus of the generation of gay men lost to AIDS—Two Boys Kissing follows Harry and Craig, two seventeen-year-olds who are about to take part in a 32-hour marathon of kissing to set a new Guinness World Record. While the two increasingly dehydrated and sleep-deprived boys are locking lips, they become a focal point in the lives of other teens dealing with universal questions of love, identity, and belonging.

Named to the National Book Award Longlist
A Lambda Literary Award Winner
A Stonewall Honor Book
"An intriguing, complex narrative with an unusual point of view...[and] a quality of retrospection that is rare (and refreshing) in YA literature." —The Washington Post
From the Hardcover edition.