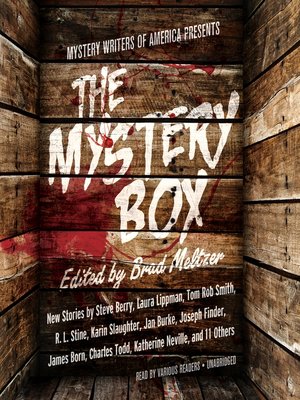 There's nothing more mysterious than a locked box. Whether it's a literal strongbox, an empty coffin, the inner workings of a scientist's mind, or an underground prison cell, there are those who will use any means necessary to unlock the secrets of The Mystery Box.

With this anthology, bestselling author Brad Meltzer introduces twenty-one original stories from today's most prominent mystery writers. In Laura Lippman's "Waco 1982," a young reporter stuck with a seemingly mundane assignment on lost-and-found boxes unwittingly discovers a dark crime. In Joseph Finder's "Heirloom," a scheming neighbor frightens the new couple on the block with an unnerving tale of buried treasure. In R. L. Stine's "High Stakes," a man on his honeymoon gets drawn into a bizarre bet involving a coffin, a bet he may pay for with his life.

From the foothills of Mount Fuji to Georgia's Okefenokee Swamp, from a physics laboratory in wartime Leipzig to an unusual fitness club in Boca Raton, these sometimes terrifying, sometimes funny, and always suspenseful tales will keep you riveted.

S. W. Hubbard is the author of the Frank Bennett Adirondack Mystery series and the Palmyrton Estate Sale Mystery series. Her short stories have appeared in Alfred Hitchcock's Mystery Magazine and the anthologies Crimes by Moonlight, The Mystery Bo...

Laura Lippman is a New York Times bestselling novelist who has won more than twenty awards for her fiction, including the Edgar Award—and been nominated for thirty more. Since her debut in 1997, she has published twenty-one novels, a novella, a ch...

Jan Burke is the author of a dozen crime novels, including the popular Irene Kelly series, as well as a collection of short stories. She is the founder of the Crime Lab Project and is a member of the board of the California Forensic Science Instit...

Brad Meltzer is the #1 New York Times bestselling author of The Inner Circle, The Book of Fate, and several other bestselling thrillers. In addition to his fiction, he is one of the only authors to ever have books on the bestseller list for nonfic...

Mystery Writers of America is the premier organization for mystery writers, professionals allied to the crime writing field, aspiring crime writers, and those who are devoted to the genre. MWA is dedicated to promoting higher regard for crime writ...

More about Mystery Writers of America

James O. Born is a former US drug and state law enforcement agent. Each of his crime novels is based on some aspect of his career. Escape Clause won the inaugural Florida Book Award for Best Novel.

Tom Rob Smith graduated from Cambridge University in 2001 and lives in London. His first novel, Child 44, was a New York Times bestseller and an international success. Among its many honors, Child 44 won the CWA Ian Fleming Steel Dagger Award and ...

Mystery Writers of America Presents The Mystery Box
Copy and paste the code into your website.
New here? Learn how to read digital books for free