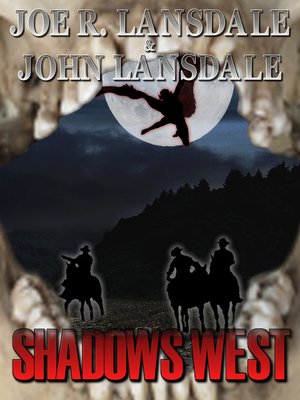 Sixguns and zombies, a chicken eating werewolf, deals with the devil, and things that go bump in the night. John Wayne never had to deal with these kind of shenanigans, or these kinds of rowdies. But Joe R. Lansdale and John L. Lansdale aren't afraid, partner. They make this kind of material their everyday business. Compared to the cowpokes in their stories, John Wayne was a big sissy. We got shoot-em-ups and bite-em-ups and blow em-ups, and the appearance of classic bad guys, like Jesse James, sent straight from hell with a bad attitude. We got a horse black as the pit and fast as the wind. We got things that won't die even when they're dead. There are demons and ugly people, both inside and out, giant spiders and unnecessary cursing, and one hot red-head heifer with an eye patch and a bull whip. Who could ask for anything more? This special Crossroad Press digital edition includes the short story Shadows West, by Joe R. Lansdale, and the screenplays Hell's Bounty, Deadman's Road, and Dead in the West, as well as an introduction by Joe R. Lansdale.