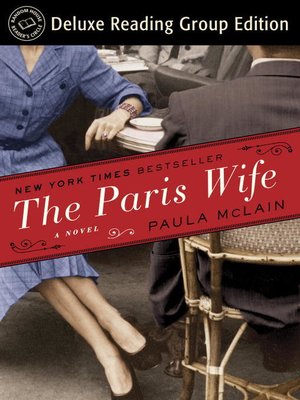 View more libraries...
NEW YORK TIMES BESTSELLER • A deeply evocative story of ambition and betrayal that captures the love affair between two unforgettable people, Ernest Hemingway and his wife Hadley—from the author of Love and Ruin and the new novel When the Stars Go Dark, available now!

This new deluxe eBook edition features more than ninety additional pages of exclusive, author-approved annotations throughout the text, which contain new illustrations and photographs, to enrich your reading experience. You can access the eBook annotations with a simple click or tap on your eReader via the convenient links. Access them as you read the novel or as supplemental material after finishing the entire story. There is also Random House Reader’s Circle bonus content, which is sure to inspire discussion at book clubs everywhere.

“A beautiful portrait of being in Paris in the glittering 1920s—as a wife and one’s own woman.”—Entertainment Weekly

The Paris Wife captures the love affair between Ernest Hemingway and his wife Hadley. Following a whirlwind courtship and wedding, the pair set sail for Europe, where they become swept up in the hard-drinking, fast-living, and free-loving life of Jazz Age Paris—hanging out with a volatile group that includes Gertrude Stein, Ezra Pound, and F. Scott Fitzgerald. As Ernest struggles to find his literary voice and Hadley strives to hold on to her sense of self, they eventually find themselves facing the ultimate crisis of their marriage—a deception that will lead to the unraveling of everything they’ve fought so hard for.

“[Paula] McLain has brought Hadley to life in a novel that begins in a rush of early love. . . . A moving portrait of a woman slighted by history, a woman whose . . . story needed to be told.”—The Boston Globe

“The Paris Wife creates the kind of out-of-body reading experience that dedicated book lovers yearn for, nearly as good as reading Hemingway for the first time—and it doesn’t get much better than that.”—Minneapolis Star Tribune

“Exquisitely evocative . . . This absorbing, illuminating book gives us an intimate view of a sympathetic and perceptive woman, the striving writer she married, the glittering and wounding Paris circle they were part of. . . . McLain reinvents the story of Hadley and Ernest’s romance with the lucid grace of a practiced poet.”—The Seattle Times