The Short Stories of Mark Twain 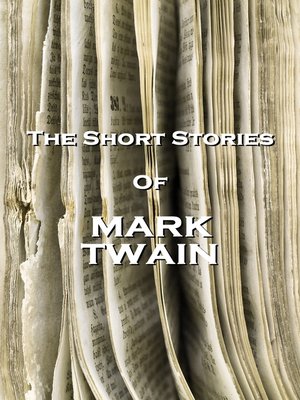 The short story is often viewed as an inferior relation to the Novel. But it is an art in itself. To take a story and distil its essence into fewer pages while keeping character and plot rounded and driven is not an easy task. Many try and many fail. In this series we look at short stories from many of our most accomplished writers. Miniature masterpieces with a lot to say. In this volume we examine some of the short stories of Mark Twain. Samuel Langhorne Clemens was born in 1835 and is far better known by his pen name; Mark Twain. An American author and humorist of the first order he is perhaps most famous for his novels, The Adventures Of Tom Sawyer, written in 1876, and its sequel, The Adventures Of Huckleberry Finn, written in 1885 and often described with that mythic line - "the Great American Novel." Twain grew up in Hannibal, Missouri, which would later provide the backdrop for these great novels. Apprenticed to a printer he also worked as a typesetter but eventually became a master riverboat pilot on the Mississippi River. Later, heading west with his brother, Orion to make his fortune he failed at gold mining and instead turned to journalism and found his true calling as a writer of humorous stories. It on these shorter stories that this volume dwells. His wit and humour sparkle from every page, his craft evident with every phase and punctured target. Twain was born during a visit by Halley's Comet, and predicted that he would "go out with it" as well. He died the day following the comet's subsequent return in 1910. Many of the stories are also available as an audiobook from our sister company Word Of Mouth.

The full volume can be purchased from iTunes, Amazon and other digital stores. Among the readers are Richard Mitchley and Ghizela Rowe. Index Of Stories - The Approaching Epidemic, My First Lie And How I Got Out Of It, The Carnival Of Crime In Connecticut, Concerning The American Language, The Danger Of Lying In Bed By Mark Twain, The First Writing-machines, How To Tell A Story, Luck, Post-mortem Poetry, Speech On Accident Insurance, The Undertaker's Chat, A Ghost Story, Mark Twain In Washington, Speech At The Scottish Banquet In London, How The Author Was Sold In Newark, Amended Obituaries.