ebook ∣ Around the World in Eighty Days, Journey to the Center of the Earth, Twenty Thousand Leagues Under the Seas · Library of Wonder 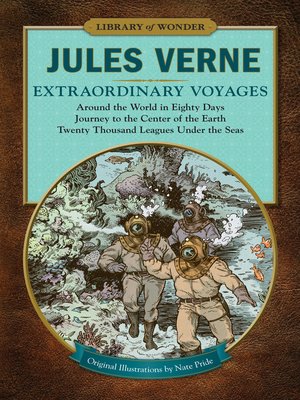 "Verne was a master at taking us on intriguing journeys to far corners of our planet—and beyond."

In the nineteenth century, French author Jules Verne awed readers with astounding adventures that transported them to the ends of the Earth, plunged them into the ocean's depths, and dropped them into mysterious subterranean realms. Dubbed Voyages Extraordinaries, these unique blends of action, adventure, and science fiction offered prescient glimpses into the future and a level of scientific speculation unprecedented in imaginative fiction.

The three novels collected here represent some of Verne's most innovative and entertaining adventures. Around the World in Eighty Days is the chronicle of irrepressible adventurer Phileas Fogg, whose wager to circle the globe involves him in one cliff-hanging escapade after another. Journey to the Center of the Earth tells of intrepid explorers who discover a subterranean world of prehistoric marvels and menaces at the Earth's core. In Twenty Thousand Leagues Under the Seas, scientist hero Captain Nemo investigates the exotic mysteries of the deep in his space-age submarine, the Nautilus. Two of these novels (Journey and 20,000 Leagues) are presented here with new English translations, and all three are newly illustrated with the incomparable fantasy art of Nate Pride.