A Part Hate, a Part Love 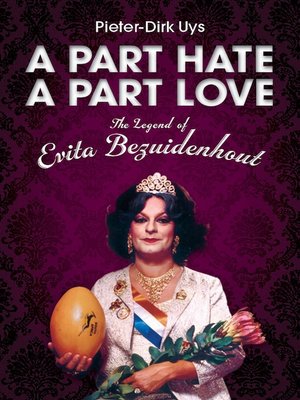 Evita Bezuidenhout, still regarded as the most famous white woman in South Africa, was born Evangelie Poggenpoel of humble Boer origins in the dusty Orange Free State town of Bethlehem on 28 September 1935. Illegitimate, imaginative, pretty and ambitious, she dreamt of Hollywood fame and fortune, tasting stardom in such 50s Afrikaner film classics as 'Boggel en die Akkedis' (Hunchback and the Lizard), 'Meisie van my Drome' (Girl of my Dreams) and 'Duiwelsvallei' (Devil's Valley). She married into the political Bezuidenhout Dynasty and became the demure wife of NP Member of Parliament Dr J.J. De V. Bezuidenhout and the proud mother of De Kock, Izan and Billie-Jeanne.

Power became her addiction. She wielded it in the boardroom, the kitchen and round the dinner table, becoming confidante to the flawed gods on the Boer Olympus and so shaping the course of history with her close and often unbelievable relationships with the grim-faced leaders of the day: Dr H.F. Verwoerd, B.J. Vorster, P.W. Botha and F.W. de Klerk. Hand in hand with the glamorous Evita of Pretoria was the Tallyrand of Africa, Pik Botha, her ageing Romeo and constant friend, while watching her from afar as she watched him, Nelson R. Mandela, alive today thanks to her timely interventions.

Satirical, provocative, radical and humorous, A Part Hate A Part Love will have you rolling on the floor one minute and weeping the next.