The Vincent Boys - Extended and Uncut 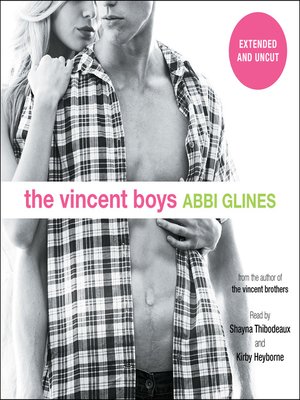 View more libraries...
Just when you thought things couldn't get any hotter...Beau and Ash's sinful romance now includes super scandalizing, never-before-published scenes in this special, eBook-only companion to the steamy printed original.
There was something wicked about Beau that drew me to him. What was wrong with me? Why did I want to sin so badly?

Ashton is getting tired of being good, of impressing her parents and playing ideal girlfriend to Sawyer Vincent. Sawyer is perfect, a regular Prince Charming, but when he leaves town for the summer, it's his cousin Beau who catches Ashton's eye. Beau is the sexiest guy she's ever seen, and even though he's dangerous, Ashton is drawn to him.

Beau loves his cousin like a brother, so the last thing he wants to do is make a move on Sawyer's girl. Ashton is off-limits, absolutely. That's why he does his best to keep his distance, even though he's been in love with her forever. When Ashton wants to rekindle their childhood friendship in Sawyer's absence, Beau knows he should say no.

Ashton and Beau don't want to hurt Sawyer. But the more they try to stay away from each other, the more intense their urges become. It's getting way too hard to resist...