Betrayal of the Virgin Bride 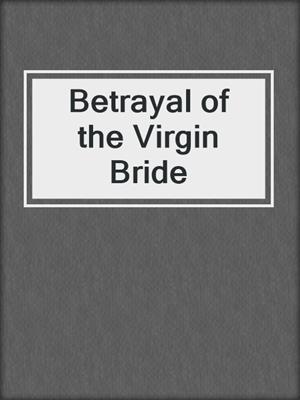 Her wedding night becomes a nightmare, as the naive virgin, Sally Kettering, finds herself trapped on board a cruise ship by her deceitful husband, George, Mr. Sun, a power Chinese businessman, and a variety of sex-hungry predators there to participate in the deflowering of an untainted bride. Her husband has embezzled money from his company, and only Sally's cooperation will keep him from prosecution. But not until she agrees to help him does she discover that her precious virginity is the only prize the ruthless Mr. Sun values. Three days of humiliation and sexual surrender follow, until she's spoiled goods and bewildered by the crudely humiliating sexual acts she's forced to perform. Finally set free, Sally is haunted by the pain and pleasure experienced in her brief captivity. Desperate and guilt ridden, she attempts to wipe out her terrible sin by submitting to a brutal taskmaster, who punishes her body to cleanse her soul. Yet, nothing will remove the sexual desire that visits her body. When Sally later attacks the officious Mr. Sun for offering her a place on his ship as a resident whore, she makes a crucial mistake. Little does she know the prices he'll extract when he abruptly takes charges of her. She is powerless to stop the retribution he metes out, or break his firm grip on her sexual desires.