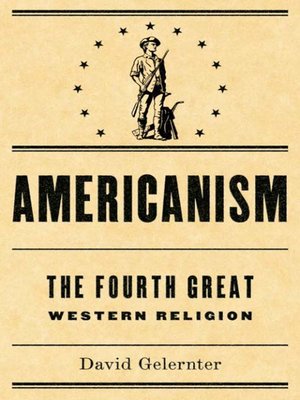 View more libraries...
What does it mean to “believe” in America? Why do we always speak of our country as having a mission or purpose that is higher than other nations?
Modern liberals have invested a great deal in the notion that America was founded as a secular state, with religion relegated to the private sphere. David Gelernter argues that America is not secular at all, but a powerful religious idea—indeed, a religion in its own right.
Gelernter argues that what we have come to call “Americanism” is in fact a secular version of Zionism. Not the Zionism of the ancient Hebrews, but that of the Puritan founders who saw themselves as the new children of Israel, creating a new Jerusalem in a new world. Their faith-based ideals of liberty, equality, and democratic governance had a greater influence on the nation’s founders than the Enlightenment.
Gelernter traces the development of the American religion from its roots in the Puritan Zionism of seventeenth-century New England to the idealistic fighting faith it has become, a militant creed dedicated to spreading freedom around the world. The central figures in this process were Abraham Lincoln, Teddy Roosevelt, and Woodrow Wilson, who presided over the secularization of the American Zionist idea into the form we now know as Americanism.
If America is a religion, it is a religion without a god, and it is a global religion. People who believe in America live all over the world. Its adherents have included oppressed and freedom-loving peoples everywhere—from the patriots of the Greek and Hungarian revolutions to the martyred Chinese dissidents of Tiananmen Square.
Gelernter also shows that anti-Americanism, particularly the virulent kind that is found today in Europe, is a reaction against this religious conception of America on the part of those who adhere to a rival religion of pacifism and appeasement.
A startlingly original argument about the religious meaning of America and why it is loved—and hated—with so much passion at home and abroad.