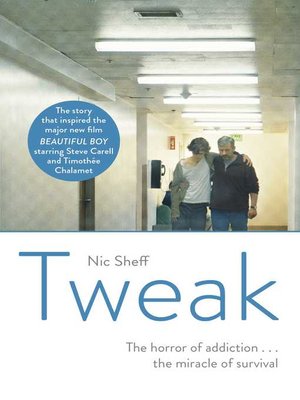 View more libraries...
THE NEW YORK TIMES BESTSELLER NOW A MAJOR FILM, STARRING STEVE CARELL AND BAFTA AND GOLDEN GLOBE NOMINATED TIMOTHEE CHALAMET
'It was like being in a car with the gas pedal slammed down to the floor and nothing to do but hold on and pretend to have some semblance of control. But control was something I'd lost a long time ago.'
Nic Sheff was drunk for the first time at age 11. In the years that followed, he would regularly smoke pot, do cocaine and ecstasy, and develop addictions to crystal meth and heroin. Even so, he felt like he would always be able to quit and put his life together whenever he needed to. It took a violent relapse one summer to convince him otherwise.
In a voice that is raw and honest, Nic spares no detail in telling us the compelling true story of his relapse and the road to recovery. He paints an extraordinary picture for us of a person at odds with his past, with his family, with his substances, and with himself.
Tweak is a raw, harrowing, and ultimately hopeful tale of the road from relapse to recovery and complements his father's parallel memoir, Beautiful Boy.
Praise for Nic Sheff:-
'Difficult to read and impossible to put down.'Chicago Tribune
'Nic Sheff's wrenching tale is told with electrifying honesty and insight.' Armistead Maupin