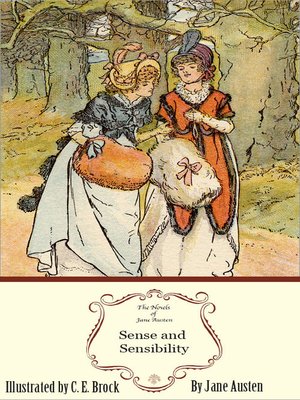 This special edition of Sense and Sensibility includes the famous illustrations by Charles Edmond Brock, created in 1898. Brock and his brothers were all successful illustrators of the day and often posed for each other using costumes, props and furniture in their Cambridge studio. Brock's younger brother, Henry, also illustrated Austen's books and joined him in illustrating other Austen releases for this set of 1898 editions.

Sense and Sensibility, first published in 1811, was Austen's first published novel. The story revolves around the Misses Dashwood, Elinor and Marianne, left in reduced circumstances after their father's death. Their new home is a cottage on a distant relative's property, where they experience both romance and heartbreak.

Marianne meets the dashing John Willoughby who courts her with poetry and flowers. Meanwhile, staid, sober neighbor Colonel Brandon also falls in love with Marianne, but she makes her preference for his rival clear. Elinor is in love with the diffident Edward Ferrars, a young man of good breeding and high moral standing. Their sentiments are quite compatible but his ambitious sister Fanny has other plans for him and works to separate these kindred souls.

As true love finds its way to persevering over all obstacles, the impetuous sister gains maturity and balance and the cautious sister has her emotional awakening.