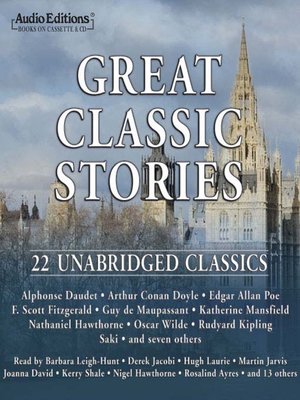 A treasure-chest of the written and spoken word, this collection is read by brilliant actors who make this audio anthology a genuine treat for the listener. Includes: "Reginald on House Parties" by Saki, read by Nigel Hawthorne; "The Sphinx Without a Secret" by Oscar Wilde, read by Martin Jarvis; "Tobermory" by Saki, read by Barbara Leigh-Hunt; "On Being Idle" by Jerome K. Jerome, read by Hugh Laurie; "For Better or Worse" by W.W. Jacobs, read by Joanna David; "The Model Millionaire" by Oscar Wilde, read by T.P. McKenna; "The Garden of Truth" by E. Nesbit, read by Harriet Walker; "The Cat That Walked by Himself" by Rudyard Kipling, read by Liza Goddard; "The Girl from Arles" by Alphonse Daudet, read by Stephen Fry; "Mr. & Mrs. Dove" by Katherine Mansfield, read by Rosalind Ayres; "Georgie Porgie" by Rudyard Kipling, read by Edward Fox; "Caterpillars" by E.F. Benson, read by Patrick Malahide; "Lost Hearts" by M.R. James, read by Richard Pasco; "Ship to Tarshish" by John Buchan, read by Iain Cuthbertson; "The Tell-Tale Heart" by Edgar Allan Poe, read by Richard Pasco; "The Man of the Night" by Edgar Wallace, read by Robin Bailey; "Dr. Heidegger's Experiment" by Nathaniel Hawthorne, read by Nicky Henson; "B 24" by Arthur Conan Doyle, read by Brian Cox; "Pat Hobby & Orson Welles" by F. Scott Fitzgerald, read by Kerry Shale; "Mad" by Guy de Maupassant, read by Derek Jacobi; "The Black Cat" by Edgar Allan Poe, read by Richard Griffiths; and "The Monkey's Paw" by W.W. Jacobs, read by Patrick Malahide.

Oscar Wilde (1854-1900) was a talented playwright who also excelled at short stories and poetry. He also had one novel to his name, The Picture of Dorian Gray (1891).

W.W. Jacobs (1863-1943) was a prolific English writer of both novels and short stories, which ranged from the macabre to the humorous in nature.

Edgar Allan Poe (1809-1849) is best known for his poetry and short fiction, which include the eerie The Raven and the short story said to be perhaps the first detective story, The Murders in the Rue Morgue.

Saki (1870-1916) was the pen name of British author Hector Hugh Monro. His witty stories satirized Edwardian society and culture, and he is considered a master of the short story.

E. Nesbit (1858-1924) was a prolific English author who penned short stories, books, and poetry, including writing or collaborating on over 60 children's books.

Great Classic Stories
Copy and paste the code into your website.
New here? Learn how to read digital books for free