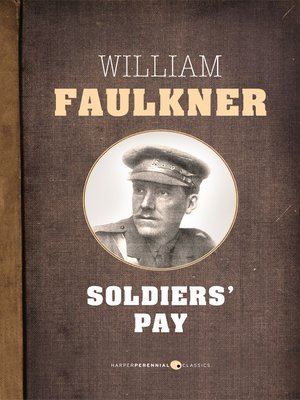 Severely wounded, aviator Donald Mahon returns to Georgia at the end of the First World War accompanied by Joe Gilligan, also a veteran, and Margaret Powers, a war widow. As he is believed to be dead, Donald's return home proves explosive to those around him. His grieving father welcomes his return as a miracle, and his fiancée is forced to choose between Donald, to whom she had promised herself, and the man for whom she developed feelings in Donald's absence. From the intrigue surrounding the state of Donald's engagement, to his worsening condition, to Margaret's guilt over her husband's death, Soldiers'Pay is the story of life after war and its lasting effects on a community.

Originally published in 1926, Soldiers'Pay was William Faulkner's debut novel and was inspired by his own frustrated aspirations to go to war. After being rejected by the US military, Faulkner joined the Canadian flyers with the Royal Air Force but was still in training when the First World War ended.