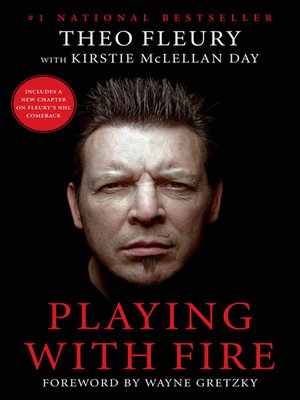 " It's hard to believe Fleury survived his own life."
— The Globe and Mail

Theo Fleury, who had walked away from hockey in 2003, leaving millions of dollars on the table and thousands of fans asking why, was determined to redeem himself. But how? With a comeback. Six years after his last NHL game, at age 41, weighing 215 pounds and with 25 per cent body fat, he had only seven months to get ready for the Calgary Flames training camp. His chance for redemption came in a pre-season game against the New York Islanders. The score was 4– 4 going into a shootout when his coach leaned over and told him, " You're up next."

In this fully up-to-date edition of Playing with Fire, Fleury gives readers the inside story on how his life has changed since this book was first published. Along with the original, fearlessly honest tale that captivated the nation, he now chronicles his NHL comeback. In the same frank, fast-paced style that made his book a blockbuster, Fleury shares fascinating new stories about life as a 41-year-old rookie, as an author on the road, and as a man in the spotlight following the disturbing news that his former coach Graham James had been pardoned for his horrific crimes. Playing with Fire is Theo Fleury's journey to hell and back, a book no one can put down or will ever forget.