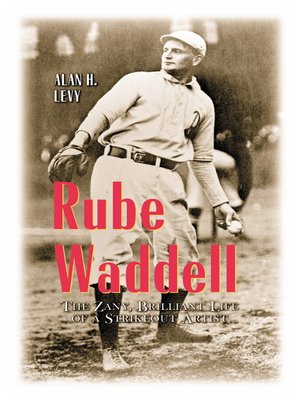 The Zany, Brilliant Life of a Strikeout Artist

Biography & AutobiographySports & RecreationsNonfiction
George Edward "Rube" Waddell was one of the zaniest characters ever to play baseball. The legendary Connie Mack, who saw quite a few cards during his nearly seven decade stint in the majors, once observed that no other screwball he ever saw could hold a candle to Rube. Mack also said that Rube's curveball was the best he'd ever seen. Indeed, Waddell was one of the greatest pitchers in the history of the game. Rube won 191 games in 13 seasons, had four straight 20-win seasons for Mack and the Philadelphia A's, and claimed six consecutive strikeout titles. In 1904 he struck out 349 batters, a record that held for six decades. This biography traces his early life in western Pennsylvania, the fits and starts of his first years in professional baseball, his big years with the A's, and his subsequent fade into obscurity and his early death in a sanatorium on April Fool's Day, 1914.
Biography & AutobiographySports & RecreationsNonfiction

Longtime baseball fan Alan H. Levy is a professor of American history at Slippery Rock University in Pennsylvania. He is the author of Joe McCarthy (2005), Tackling Jim Crow (2003) and several books on American music, including a biography of the ...

More about Alan H. Levy
Rube Waddell
Copy and paste the code into your website.
New here? Learn how to read digital books for free