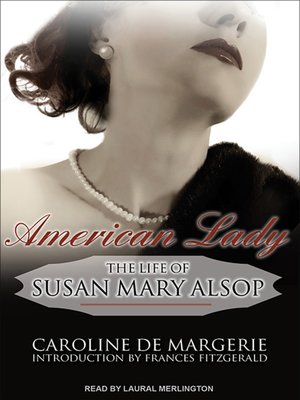 The Life of Susan Mary Alsop

Biography & AutobiographyPoliticsNonfiction
An American aristocrat-a descendant of founding father John Jay-Susan Mary Alsop (1918-2004) with husband, Joe Alsop, brought together the movers and shakers of not just the United States, but the world. Henry Kissinger remarked that more agreements were concluded in her living room than in the White House.Born in Rome, brought up in Argentina and the United States, Susan Mary arrived in Paris in 1945 to join her first husband, Bill Patten. There she witnessed "history on the boil" at dinners with Winston Churchill, Duff Cooper (the British ambassador and the love of her life), FDR, Greta Garbo, and many others. A year after Bill's death in 1960, she married the renowned journalist and legendary power broker Joe Alsop. Dubbed "the second lady of Camelot," Susan Mary hosted dinner parties that were the epitome of political power and social arrival. She reigned over Georgetown society for four decades; her house was the gathering place for everyone of importance, including John F. Kennedy, Katharine Graham, and Robert McNamara.
Biography & AutobiographyPoliticsNonfiction

Caroline de Margerie has worked as a diplomat and is now a member of the Conseil d'État, the highest administrative court in France.

More about Caroline de Margerie
American Lady
Copy and paste the code into your website.
New here? Learn how to read digital books for free