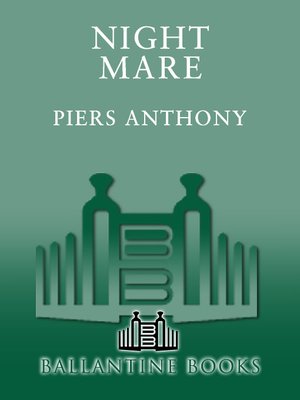 FantasyFictionThrillerHumor (Fiction)
The danger to Xanth was so great that only a night mare could offer hope!
The Nextwave of barbarian warriors was invading Xanth from the north, ravaging and destroying as they advanced. But Mare Imbrium had her own problems. Ever since she had gained the half soul, the night mare had begun to mishandle her job of delivering bad dreams. Now the night Stallion dismissed her, exiling her to the day world with a message for King Trent: Beware the Horseman!
She had no idea what that meant. But that was the way with prophetic warnings—nobody could understand them until it was too late.
Then she met the Horseman. And she discovered that one who would right a night mare was a master of a bit and spur, and not a man to surrender her.
For the night mare, it all began to be a horrible nightmare!
FantasyFictionThrillerHumor (Fiction)

Piers Anthony, sometimes called Pier Xanthony, is the pseudonym of a Mundane character who was born in England in 1934, came to America in 1940, was naturalized in 1958, and moved to Xanth in 1977. His first story was published in 1963, and his fi...

More about Piers Anthony
Night Mare
Copy and paste the code into your website.
New here? Learn how to read digital books for free