All Heads Turn When the Hunt Goes By 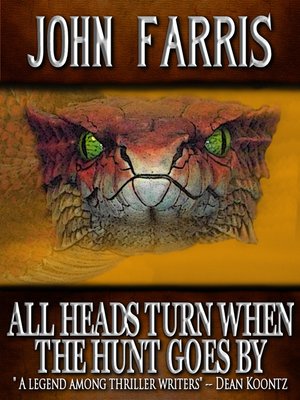 The affair is a military wedding. The groom's parents are the Bradwins, one of the oldest and most distinguished families in Virginia. The family head, General "Boss" Bradwin, is a famous army officer. Of all his prized sons, his youngest, "Clipper" Bradwin, is the most promising. First in his class at Blue Ridge Military Academy, graduate with all honors, he is now entering into holy matrimony and then into wartime service of his country. What will begin, however, with the solemnity of his marriage vows will end in the echoing screams of the damned-an ungodly spectacle of spilled blood and sobbing, throat-aching terror. For this distinguished family is like no other on earth. There is a curse on their blood. Their family history is rooted not in magnolia and honeysuckle, but in darkness and demonism, in frightening forces beyond their knowledge and control. Their august history begins not in antebellum mansions, but with supernatural sorcery in the ancient rites and rituals of dark African jungles. There is a curse that grips the Bradwins from generation to generation, from horror to bloody horror, and that climaxes in a spine-chilling nightmare of black occultism and blood vengeance.