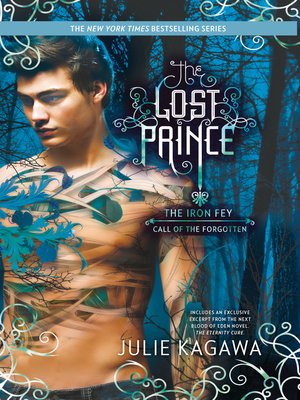 View more libraries...
From the limitless imagination of New York Times and USA Today bestselling author Julie Kagawa, The Iron Fey series continues.
Don't look at Them. Never let Them know you can see Them.
That is Ethan Chase's unbreakable rule. Until the fey he avoids at all costs—including his reputation—begin to disappear, and Ethan is attacked. Now he must change the rules to protect his family. To save a girl he never thought he'd dare to fall for.
Ethan thought he had protected himself from his older sister's world—the land of Faery. His previous time in the Iron Realm left him with nothing but fear and disgust for the world Meghan Chase has made her home, a land of myth and talking cats, of magic and seductive enemies. But when destiny comes for Ethan, there is no escape from a danger long, long forgotten.
MY NAME IS ETHAN CHASE. AND I MAY NOT LIVE TO SEE MY EIGHTEENTH BIRTHDAY.
Don't miss the first book in Julie Kagawa's highly anticipated new series, SHADOW OF THE FOX, AVAILABLE OCTOBER 2, 2018
"Julie Kagawa is one killer storyteller."
—MTV's Hollywood Crush blog
"The Iron King has the...enchantment, imagination and adventure of... Alice in Wonderland, Narnia and The Lord of the Rings, but with lots more romance."
—Justine magazine
"Fans of the first 'Iron Fey' series will be interested in seeing Meghan and her family again, while new readers will find enough detail to help them jump right in and enjoy the magic, adventure, and touch of romance."
—School Library Journal on The Lost Prince