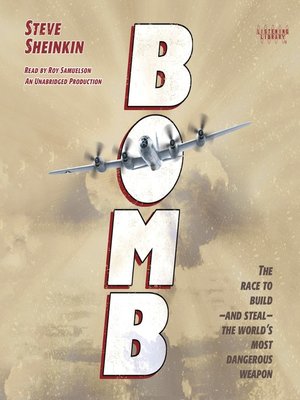 HistoryYoung Adult Nonfiction
In December of 1938, a chemist in a German laboratory made a shocking discovery: When placed next to radioactive material, a Uranium atom split in two. That simple discovery launched a scientific race that spanned 3 continents. In Great Britain and the United States, Soviet spies worked their way into the scientific community; in Norway, a commando force slipped behind enemy lines to attack German heavy-water manufacturing; and deep in the desert, one brilliant group of scientists was hidden away at a remote site at Los Alamos. This is the story of the plotting, the risk-taking, the deceit, and genius that created the world's most formidable weapon. This is the story of the atomic bomb.

Bomb is a 2013 Newbery Honor, winner of the YALSA Award for Excellence in Nonfiction, Winner of the Robert F. Sibert Medal, and a National Book Awards finalist for Young People's Literature.
HistoryYoung Adult Nonfiction

Steve Sheinkin is the award-winning author of several fascinating books on American history, most recently The Notorious Benedict Arnold, which won the YALSA Award for Excellence in Nonfiction for Young Adults, the Boston Globe/Horn Book Award for...

More about Steve Sheinkin
Bomb
Copy and paste the code into your website.
New here? Learn how to read digital books for free