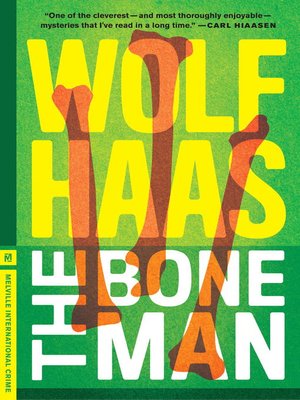 The wry and rueful Columbo of Austria investigates a grisly murder at a beloved restaurant where snooty Viennese gourmands go to eat ... fried chicken.

At a wildly popular chicken shack in the Austrian countryside, a gruesome discovery is made in the pile of chicken bones waiting to be fed into the basement grinder: human bones. But when former-police detective now private eye Simon Brenner shows up to investigate, the woman who hired him has disappeared ...

Brenner likes chicken, though, so he stays, but finds no one will talk. And as he waits for the disappeared manager, there's one ghastly find after another.

Perhaps the most raucous book in the series, The Bone Man manages to make fun of institutions from high cuisine to soccer while nonetheless building relentless suspense based in all-too-real social issues. Smart, tense, and funny, the book makes clear why Carl Hiaasen called Wolf Haas "the real deal."