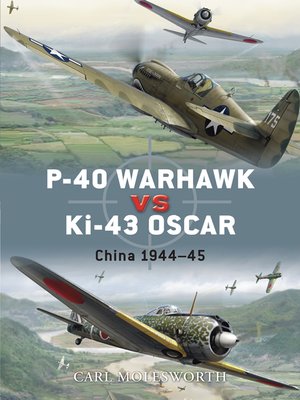 HistoryMilitaryNonfiction
Known for the distinctive "sharkmouths" decoration on their noses, P-40 fighters first saw combat in China during World War II.Their most common adversary was the Japanese Nakajima Ki-43, nicknamed "Oscar." Carl Molesworth describes and explains the design and development of these two foes, the products of two vastly different philosophies of fighter design. The P-40 was heavily armed and sturdy with armor protection and self-sealing fuel tanks, but paid for this with the loss of speed and a sluggish performance at altitude. The Ki-43 was a rapier to the battleaxe P-40 and the Ki-43 was immensely nimble, though with less firepower and durability. This book examines these two different fighters, and the pilots who flew them over China, with an action-packed text, rare photographs and digital artwork.
HistoryMilitaryNonfiction

Jim Laurier is a native of New England and lives in New Hampshire. He attended Paier School of Art in Hamden, Connecticut, from 1974–78, and since graduating with Honours, he has been working professionally in the field of Fine Art and Illustratio...

More about Carl Molesworth
P-40 Warhawk vs Ki-43 Oscar
Copy and paste the code into your website.
New here? Learn how to read digital books for free