A History of Performing Pitch

ebook ∣ The Story of 'A' 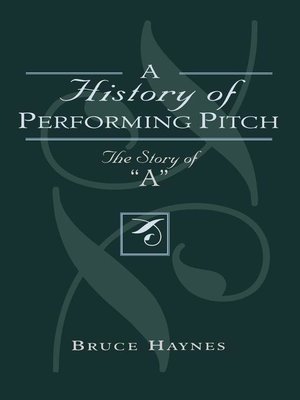 View more libraries...
This is the first complete survey of the historical pitch standards used by musicians during the last four centuries. Written from a practical perspective and addressed to performers it is the first book to attach frequency values to pitch names and describe where, when, and why various historical pitch levels were used. It surveys a period from the 16th century to the present and focuses on Italy, France, Germany, the northern and southern Netherlands, and the Habsburg Lands, following the developments in the design and function of instruments and how they influenced and were influenced by pitch changes.
The History of Performing Pitch explores the relationships between pitches like Chorton, Cammerton, and Consort-Pitch and what pitch frequencies they represented at various times and places. It also examines what effect pitch differences had on musical notation and choice of key, and discusses practical considerations musicians would have had to make when transposing, especially with regards to the range of singers' voices.
What distinguishes this book from previous pitch studies is that it has been written since the rise of the early music revival within the context of the growing understanding of how "early" instruments work. This development has provided a new source of empirical information not previously available, which allows this book to base its conclusions on a much larger and more relevant sample than has ever been possible before. It refers to the original pitches of some 1,382 historical instruments, including cornetts, Renaissance flutes, traversos, recorders, clarinets, organs, pitchpipes, and automatic instruments from all over Europe and compares this information with music and written texts. While this study avoids categorical answers where historical information is not yet sufficient to justify them, it locates a number of historical pitch levels, discovers several that were previously unnoticed, and disproves several common myths about pitch.