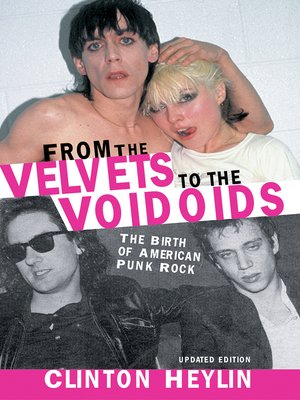 From the Velvets to the Voidoids

The Birth of American Punk Rock

Exhaustively researched and packed with unique insights, this history journeys from the punk scene's roots in the mid-1960s to the arrival of "new wave" in the early 1980s. With a cast that includes Patti Smith, Pere Ubu, Television, Blondie, the Ramones, the MC5, the Stooges, Talking Heads, and the Dead Boys, this account is the definitive story of early American punk rock. Extraordinarily balanced, it tells the story of the music's development largely through the artists' own words, while thoroughly analyzing and evaluating the music in a lucid and cogent manner. First published in 1993, this was the first book to tell the stories of these then-little-known bands; now, this edition has been updated with a new discography, including imports and bootlegs, and an afterword detailing the post-1970s history of these bands. Filled with insights from interviews with artists such as Lou Reed, Debbie Harry, David Byrne, Patti Smith, and Richard Hell, this book has long been considered one of the essential reads on rock rebellion.

Clinton Heylin is the author of, among others, Bob Dylan: Behind the Shades Revisited, Bootleg: The Secret History of the Other Recording Industry, Can You Feel the Silence? Van Morrison: A New Biography, The Da Capo Book of Rock & Roll Writing, a...

More about Clinton Heylin
From the Velvets to the Voidoids
Copy and paste the code into your website.
New here? Learn how to read digital books for free